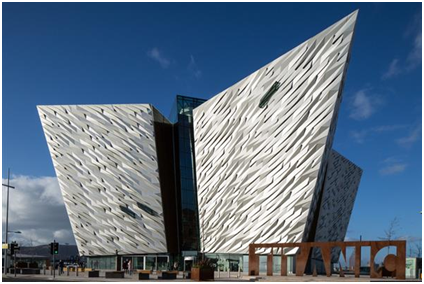 When RMS Titanic sailed away on her maiden voyage on April 10th, 1912, she was hailed as 'the new wonder of the world'. A remarkable feat of engineering, she was the largest and most luxuriously appointed ship ever seen and, despite her tragic sinking five days later, she remains a source of enduring pride in the city where she was built - Belfast.

Titanic Belfast is a 'must see' on any trip to Belfast and has become the most popular tourist attraction in Northern Ireland and one of the top attractions in Ireland. Housed in an iconic, six-floor building, Titanic Belfast is located in the heart of Belfast, right beside the historic site of this world-famous ship’s construction.

The Titanic experience takes you through nine galleries, telling the story of RMS Titanic, from her conception in Belfast in the early 1900s, through her construction and launch, to her famous maiden voyage and tragic end. The galleries are innovative and interactive with many features including diving to the depth of the ocean to explore where RMS Titanic now rests. The Titanic story is told at Titanic Belfast in a fresh and insightful way.

Visitors can now also experience three new galleries, which capture the excitement of launch day, as well asThe Maiden Voyage gallery, which transports visitors from four embarkation ports, Belfast, Southampton, Cherbourg and Queenstown (now known as Cobh) to Titanic’s deck promenade. Guests can not only see and hear the ocean and feel the ships engines rumbling on board at the Palm Court Café but can also meet Fredrick Dent Ray, a dining room steward and survivor, utilising technology used in Disneyland’s Haunted Mansion and Universal Studios Florida’s Hogwarts Express attraction. The Maiden Voyage gallery also includes an original first class luncheon menu dated April 14, 1912, as well as the last letter ever to be written on board the Titanic

Tickets for Titanic Belfast galleries are based on a timed ticketing with slots available every 15 minutes throughout opening times. Last admission is 1 hour 45 minutes before closing time (excluding Late Saver Ticket).

Titanic Belfast is an accessible building.

This one hour long walking tour is conducted inside and outside of the building walking the footsteps of the people who designed and built RMS Titanic.

Enjoy Sunday Afternoon Tea at Titanic Belfast in the opulent surroundings of the Titanic suite featuring the stunning replica staircase and with Jazz musicians playing to add even more atmosphere to your afternoon.

Guests may use the Grand Staircase & capture memorable photos.

For more info on events and to book tickets visit www.titanicbelfast.com

Text and photo from http://www.discovernorthernireland.com/titanic/