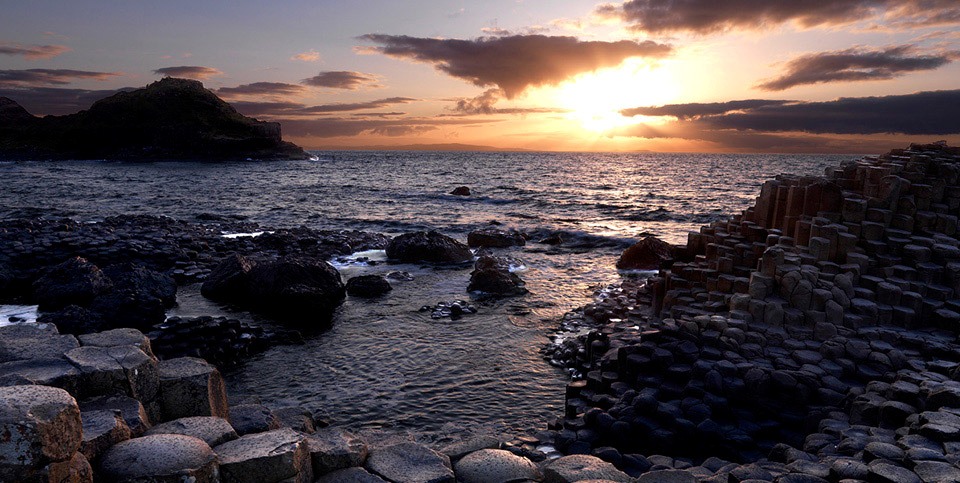 It is now almost 5 years since the then First Minister Peter Robinson and deputy First Minister Martin McGuinness initiated the Northern Ireland government presence in Beijing and the Executive approved the strategy for China.

The strategy was our first outreach to China and focussed on raising the profile of NI, promoting our economic, education policy and organisations and establishing relations with key Chinese provinces. This approach recognised that trying to cover a country as vast as China and a population of 1.4 billion was impossible but by reaching out to provinces with similar priorities, and where we had opportunities to influence their leaders by sharing our experience, would create greater access to decision makers. The Bureau will still cover sectoral issues where events may take place in other parts of China but this strategy allows for a deeper relationship building and access to a population of over 160 million people.

During this time we were delighted China agreed to open a consulate in Northern Ireland and we have been very fortunate to have two excellent consul generals with us, first Madam Wang Shuying and now Madam Zhang Meifeng.

Some of the results from those first five years are:-

This is a good start but there are many more opportunities for Northern Ireland so we need to build on this work to date and be more joined up and more proactive in the future.

The Belt and Road Forum. 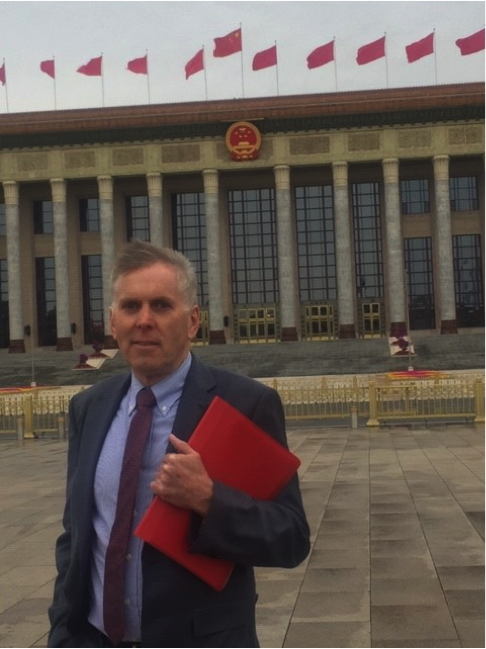 David Sterling, Head of the NI Civil service was invited to speak at the Belt and Road Forum in Beijing. This event was attended by 48 heads of state as well as the International Monetary Fund and senior officials from 140 governments.

The Belt and Road is the major Chinese international and economic strategy building relationships through investment, trade and cultural understanding. It was a great honour to be invited to present at the sub national forum here and David Sterling, along with the Chancellor of the Exchequer, were the only two speakers from the UK at the event. The Northern Ireland presentation focussed on the strengths of our economy and the success to date of our relationships with the provinces of Liaoning, Hubei and also now Jilin. During the Forum we met up with vice governors from our partner provinces and discussed future visit programmes. 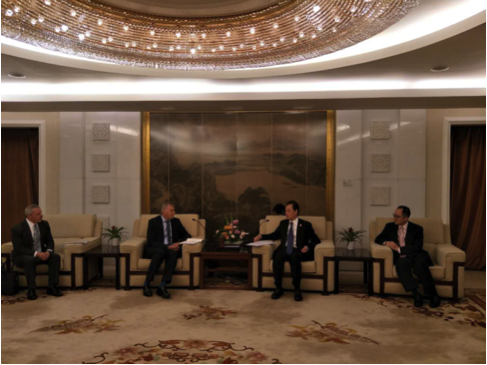 Outside of the Forum events David had meetings with the Chancellor, the Minister for Trade from the Republic of Ireland, Vice Minister Wang from the Ministry of Foreign Affairs and Vice President Song from the Chinese Friendship Association.

David also came to our office and met with NIB staff where he was briefed on the bureau’s work this year. We discussed future strategy for China and David was very pleased to see the Bureau go from strength to strength. 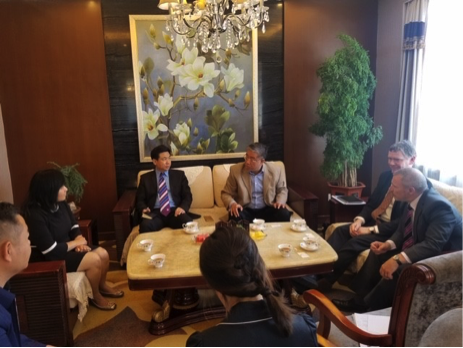 The relationship with Jilin and Changchun is developing well with a strong interest in economic and education links. Northern Ireland and Newry, Mourne & Down have hosted visits from both the municipal and provincial government’s investigation opportunities in both sectors. A follow up visit is planned and we hope to welcome back officials for more in depth discussions later this year.

Tim Losty was also invited to attend the official ceremony to upgrade the university in the Chinese government system, in recognition of its international contribution. This year’s Tourism Ireland business mission included 5 organisations from Northern Ireland and Andrew McCormick, Director General for International Activities, and John McGrillen CEO of Tourism Northern Ireland also attended and we were able to have a number of roundtable discussions with the industry and NI Diaspora to see how we can increase our profile and visitors to NI. Given the future value of the Chinese market Tourism Ireland is expanding its presence here and the Bureau, Tourism NI will provide support to increase the number of Chinese visitors to over 200,000. Northern Ireland’s relationship with the province of Hubei goes from strength to strength and the formal partnership between Fermanagh, Omagh and the city of Huangshi is also developing very well. Tim Losty met with new UK Consul General in Hubei, Gareth Hoar, to discuss the relationship with Hubei and later to meet with newly appointed Vice Mayor Li Wen of Hubei City. We are hoping that both the provisional and municipal governments will visit Northern Ireland and their partner council towards the end of the year and Vice Mayor Li Wen reaffirmed his commitment to working with Fermanagh, Omagh in trade and education exchanges.

Li Wen, Vice Mayor of Huangshi, Hubei. He worked in People's Posts and Telecommunications Press of the Ministry of Industry and Information Technology as Vice President, and in China Industry and Information Technology Publishing Media Group as Deputy General Manager. His job is to coordinate the development and construction of Huangshi New Port (Logistics) Industrial Park and liaise with Huangshi Federation of Industry and Commerce and key industrial enterprises. He specialise in industry and information technology, industrial investment, e-government, transportation, state-owned assets supervision and enterprise reform. He is also responsible for the application for national high-tech zone and planning, construction as well as development of the Daye Lake District in Huangshi.

Tim Losty attended the upgrading ceremony for Jilin International Studies University to make it one of the prestigious universities in the province of Jilin. The University has a strong emphasis on developing international connections and has developed a global village on site and attracts many foreign students and teachers to the campus. The Bureau has been developing connections with the university for about 18 months and supporting the developing relations with the NI Confucius Institute. Jilin has now agreed to provide a number of teachers to come to Northern Ireland to teach Mandarin and we will also be working on a student and teacher exchange programme over the next year. Seven sculptures by Irish artist Maurice Harron, based on characters from Lewis's famous book, The Lion, the Witch and the Wardrobe were unveiled in the square by Northern Ireland’s then First Minister, Arlene Foster.

One of the art pieces that attracted the most attention was the statue of the White Witch; the epitome of evil in the Lewis novels.

Unbeknown to most people, the body and dress of the White Witch was cast in a stainless steel, ‘mirror-finish’ surface some 5,000 miles away from Belfast - in Beijing China.

The work was carried out by Sino Sculpture Group, Shuipo village, Shunyi District, Beijing. Here, the workers made the ceramic shell moulds with their pouring cups and sprues and poured the liquid stainless steel to create the finished White Witch sculpture.

Game of Thrones in China Curtains fell. The era of Ice and Fire has come to an end. But there is little doubt that this epic series will continue to generate interest in tourism to fans around the world for a long time to come. “Game of Thrones is the biggest TV show in the world, and has been broadcast in more than 170 countries and territories. On average, each episode of Season 7 was viewed by some 31 million people. It’s been huge in China and Chinese tourists have been visiting Northern Ireland on the back of the show's popularity.” China Daily has recently done an article on this showcasing the series’ influence (see the original article Tourists take to Game of Thrones trail https://www.chinadaily.com.cn/a/20190/21/WS5ce33d26a3104842260bcc31.html).

In 2017, Tourism Ireland’s GoT promotional campaign in China alone ran on five platforms, aiming at 14 million people. “Our aim is to spike people’s curiosity about the landscapes and locations featured in the series and inspire them to travel to Northern Ireland and explore them for themselves.” Now people here is really talking about Northern Ireland. And we are expecting to see more and more Chinese tourists in Northern Ireland as we are confident that we have what they want. We welcome CHEN Mengyin, or Mandy, joining us in April 2019 as Northern Ireland Bureau Officer. Mengyin has an undergraduate degree in English and French Literature from Dalian University of Foreign Languages and a postgraduate diploma in legal translation from China University of Political Sciences and Law in Beijing, followed by a one-year exchange student experience in Bordeaux, France. After graduation she joined the Confucius Institute programme and worked two years as a mandarin teacher in Bangor, Wales and Belfast, Northern Ireland.

Originally from Dandong, a boarder city in Liaoning province, Mengyin knows Dongbei area well. This helps, with her experience living in Belfast, with the partner relationship between the two regions. During her stay in Belfast, she worked with Northern Ireland Confucius Institute and taught mandarin in several secondary schools including Grosvenor Grammar School and Down High. This is also where she first crossed path with NI Bureau working as a volunteer for the 3nd UK-China leader summit which was held in Belfast. Interested in travelling and culture exchange, she has volunteered a short time with Visit Belfast and gained good knowledge of Northern Ireland tourism, historical heritages and cultural attractions. She works on the Bureau’s marketing and social media and can be contacted at chen.mengyin@fco.gov.uk.